CasinoSource.co.uk
» guides »
The Art of Gambling

The Art of Gambling

Gambling is one of the world's oldest pastimes, with references to betting and playing casino games found in the history of many cultures. Some of the most well-known figures of each generation were even known gamblers, including many of today's top musicians, for example. While attitudes to wagering money have changed over the centuries, the perception and act of gambling have inspired some of the greatest works of art, from the 17th century to the modern day. Read on to discover the top classics depicting or related to gambling: 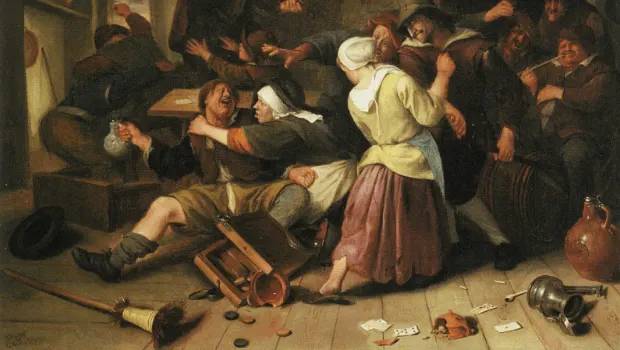 Dutch painter Jan Steen created Joueurs se Querellante (Gamblers Quarrelling) circa 1665. This oil canvas perfectly captures a snapshot of a tavern brawl, with a dozen or so people entangled in a heated exchange over a game of backgammon. The pieces and the board are strewn on the floor at the bottom of the painting, along with the cards of a nearby game that has been interrupted by the fight. Two women try to break up the warring players, while a happy fiddler provides music to the melee. Steen’s works were well known for their humour, and he painted another scuffle over backgammon in Streit beim Kartenspiel (Knife Fight). Gamblers Quarrelling hangs in the Detroit Institute of the Arts. 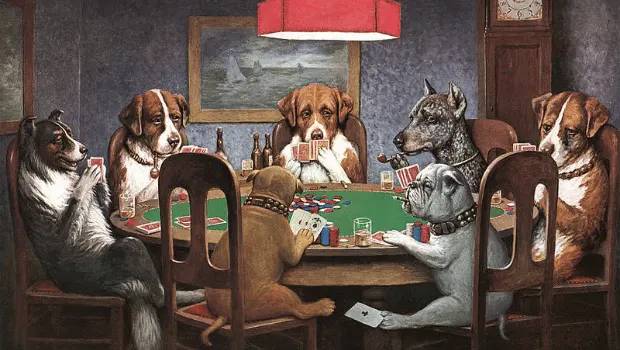 In 1903 Minnesota publishing company Brown & Bigelow commissioned artist Cassius Marcellus Coolidge to create the Dogs Playing Poker collage of 16 paintings originally to advertise cigars. Coolidge depicted a world where animals, mainly dogs, were reimagined with human bodies and traits. The first and most famous of the series, Poker Game, was sold at auction in November 2015 for $658,000. Likewise, a pair of paintings, A Bold Bluff and Waterloo, serve to illustrate the beginning and end of a poker game. The two were sold together at an auction in 2005, when the owner, who was expecting $50,000, received a pleasant surprise when they finally went for $590,400. 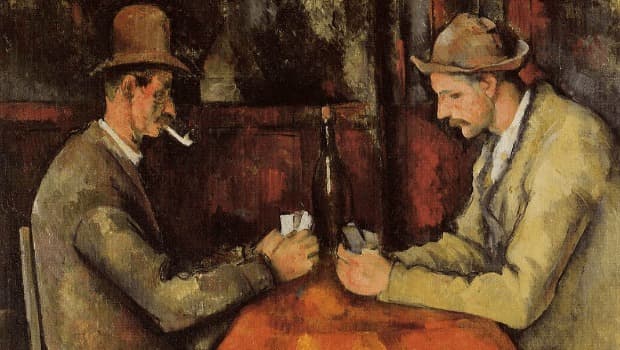 This understated gem, by French Post-Impressionist artist Paul Cézanne, was thrust into the spotlight in 2011 when the state of Qatar bid $250 million for it. The Card Players is one of five in the series, painted in the early 1890s, with the others on display at galleries and museums around the world, including the Metropolitan Museum of Art in New York, the Musée d’Orsay in Paris, the Courtauld in London, and the Barnes Foundation in Philadelphia. All five show players silently locked in a game of cards like blackjack, each staring down at their hand. Cézanne used local farmhands as his models, evident from the subtle details in the background. There's little narrative or drama evoked from the portraits, simply the act of playing cards itself.

At the Roulette Table in Monte Carlo 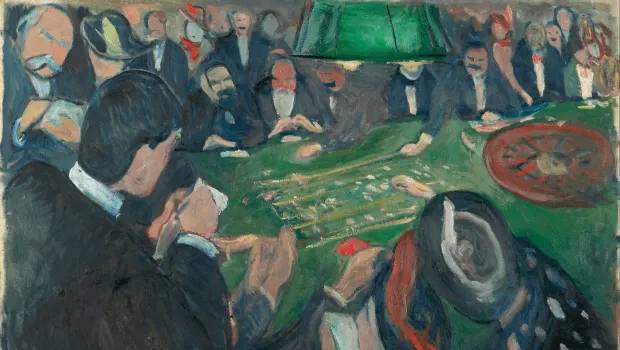 Edvard Munch is most famous for his masterpiece The Scream, but the Norwegian painter often visited the south of France, and was something of a regular at the casino tables of Monte Carlo. He transferred his obsession with gambling into his art, producing several paintings set around the subject, including the game of roulette. At the Roulette Table in Monte Carlo conveys the excitement and nervous energy that surrounds the table while the wheel spins, with the faceless crowds watching on. The 1892 oil on canvas is now part of a collection at The Munch Museum in Oslo.

The Cheat with the Ace Of Clubs 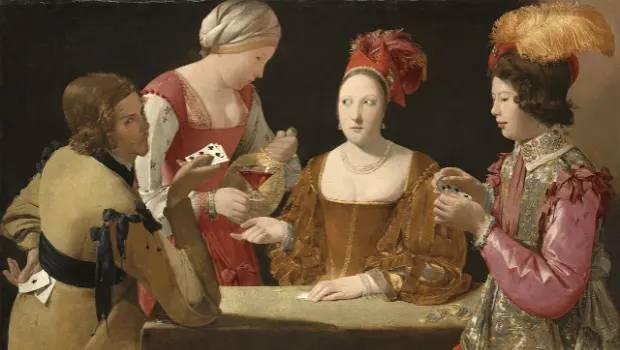 Georges de La Tour’s painting shares several themes with another gambling-related piece of art, Caravaggio’s The Cardsharps. Both can be found in the Kimbell Art Museum in Texas, but The Cheat with the Ace of Clubs, 1630-34, is clever in that it makes the observer a participant of the crime. The titular cheat, located on the left, angles his cards so that anyone viewing the painting can see them, while the other three players can't. It perfectly captures the tense drama and psychological warfare of side-glances and steel gazes that spectators at modern poker tournaments regularly observe.

Freud and Bacon's Debt to McLean 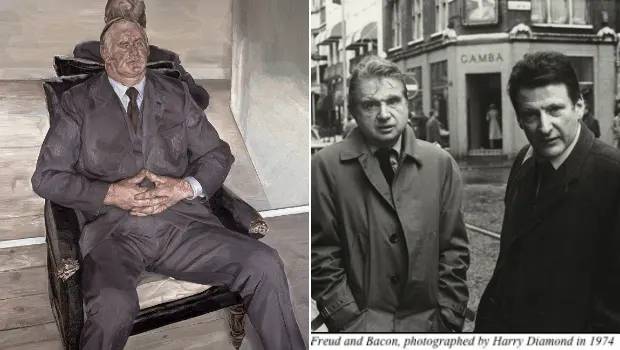 While not depicting gambling in their works of art, Lucian Freud and Francis Bacon are linked not only through their friendship, but by a bookkeeper named Alfie McLean. Freud fell into debt with the Irish bookie, who allowed the balance to be paid off through the artist’s work. He became friends with the bookmaker from Ballymena, as did fellow artist Francis Bacon, who also traded his talents to erase his arrears. Over the span of 40 years, it's believed Freud painted 23 portraits of McLean and his family, each one covering a debt. When McLean passed away in 2006, the collection was valued in the region of $100 million.