CasinoSource.co.uk
» guides »
What Are the Odds of Your Flight From the UK Being Cancelled?

What Are the Odds of Your Flight From the UK Being Cancelled?

For the first time in a long time, holidaymakers in 2022 expect to return to some kind of normality.

This summer many have booked or are planning to book getaways now that travel restrictions have been lifted, but flight cancellations and delays have hit the UK especially hard.

The industry as a whole is trying to recover from the COVID-19 pandemic, but some UK airports and airlines, such as Easyjet, have had more problems than others. We at CasinoSource have dived into the official aviation statistics to see: 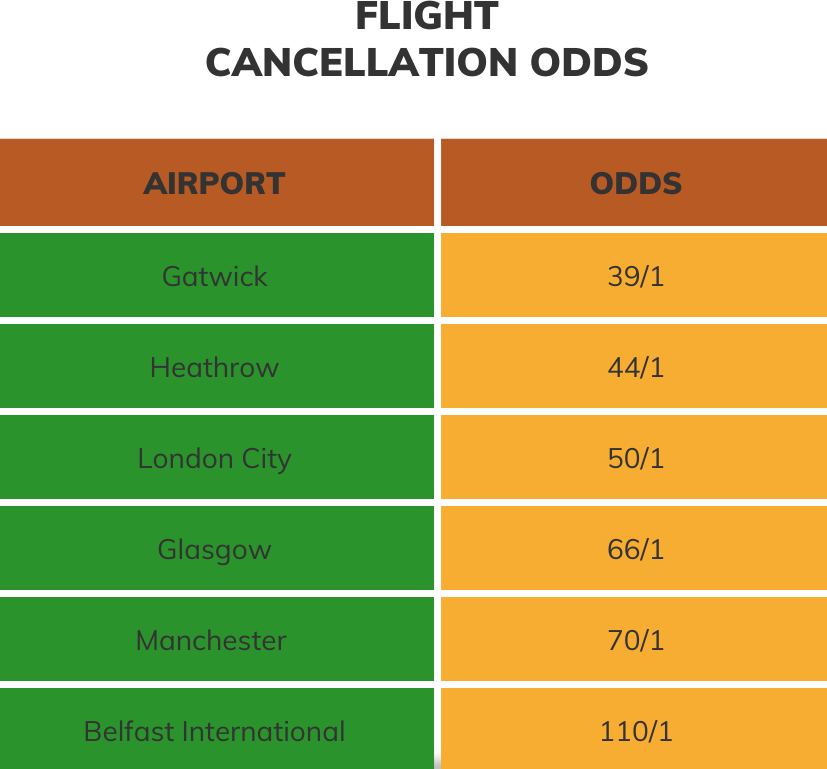 The odds of missing your flight at each airport compiled by CasinoSource traders. (Credit: CasinoSource)

Read on the find out the chances of a cancelled flight affecting you this summer.

Heathrow is the top UK airport with a third of the flight departures in the whole country, a total of 30.1% of all British passengers overall.

For its size, you’d expect plenty of opportunity for flight woes, and it does have a high percentage of cancellations, 2.27% of flights cancelled. However, it was not the worst-performing London airport.

Gatwick Airport got bad marks overall with the most flight delays and cancellations in the country, as well as London. Stanstead is the most reliable London airport, with just 0.35% of flights being cancelled.

It is worth noting that Gatwick announced it would cut back the number of summer flights overall because of staff shortages.

Manchester Airport has the highest passenger numbers outside of the London airports, with 14,706 departing passengers last month. It also holds the dubious crown of being the Northern airport most likely to suffer from flight cancellations. 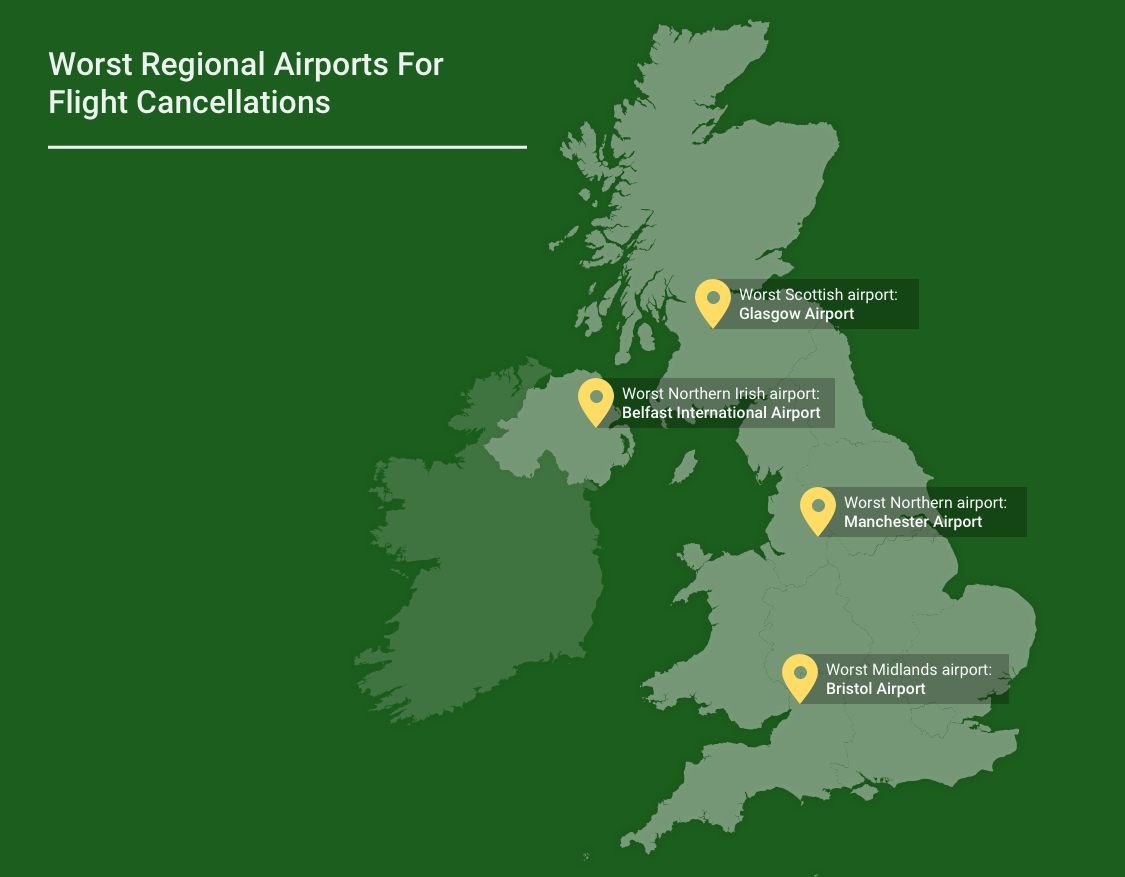 In the north of England, passengers leaving from Manchester Airport are most likely to suffer from cancelled flights while Newcastle Airport is the airport with the least reported cancellations.

Being delayed can cause just as much disruption to a holiday. We looked at the latest available data for flight delays across UK airports and found that four London airports topped the list, with Gatwick being the worst for flight delays.

After Gatwick, Southend, London City, and Heathrow Airport respectively were the worst for flight delays in 2020. The longest average delay was at Gatwick: 9.9 minutes.

However, this was an average for the entire year and it’s likely that the average summer holidaymaker will wait much longer than that for a delayed flight. We at CasinoSource looked at the delay data and the average flight delay in a 24 period across the last 30 days at Gatwick was 35 minutes. 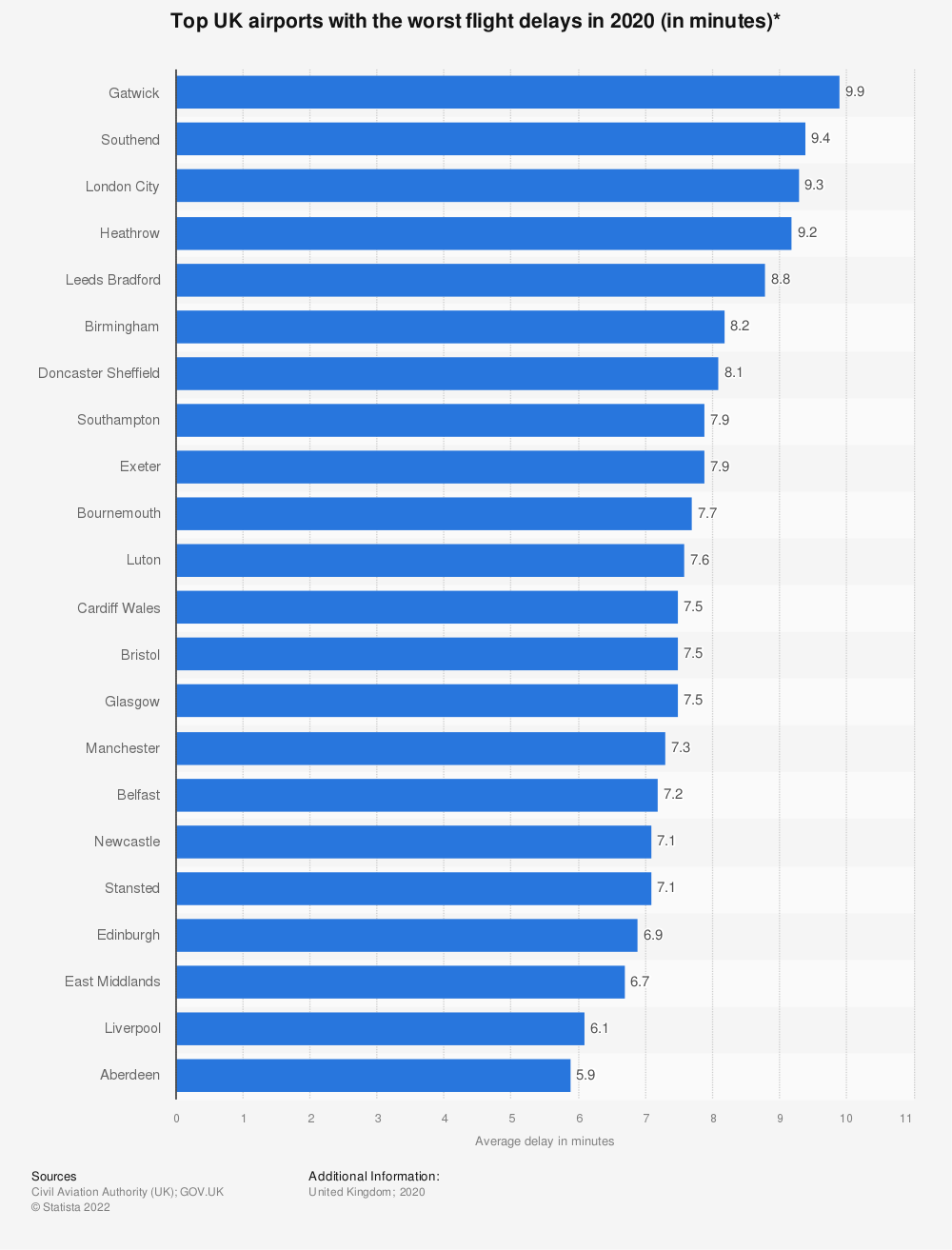 From the regional airports, the worst airports for flight delays outside of London were regional hubs Leeds Bradford Airport and Birmingham Airport, with an average of 8.8 minutes and 8.2 minutes delay respectively.

A lot of factors go into flight cancellations. Other than the airport, a defining factor is which airline a person chooses to fly. Budget airlines and airlines that offer cheap package holidays are the most popular, but are they also the most unreliable?

TUI, Ryanair, and Jet2 are some common choices. Let’s see how they stack up and if they are among the top airlines that are likely to cancel flights this summer.

One way to measure this is by the on-time arrival data available. This is how the top three holiday airlines performed in the last month. 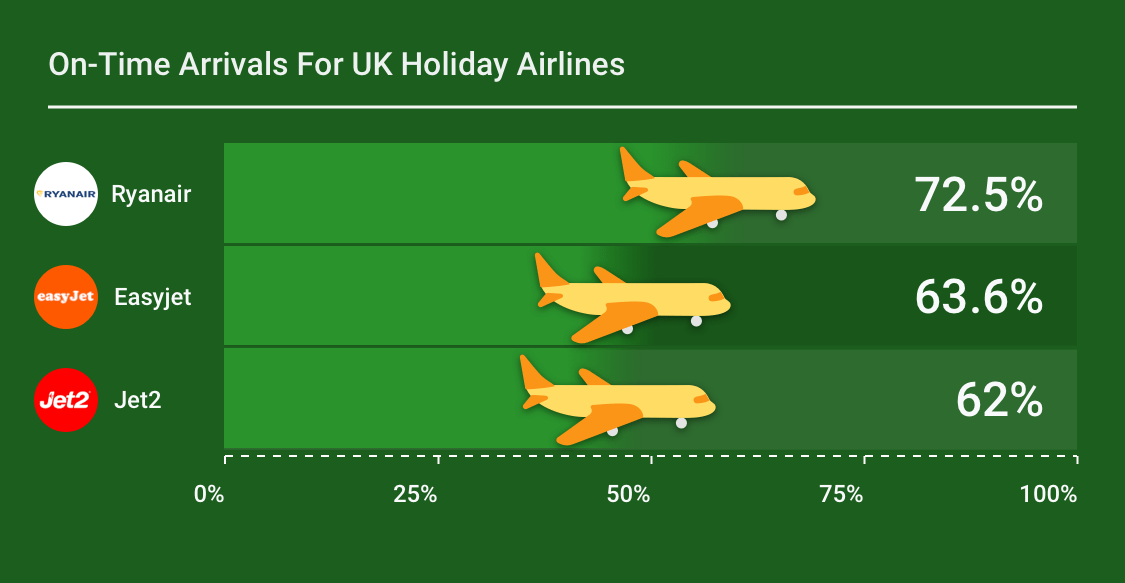 Ryanair had the least delays out of the budget airlines and that makes it the top choice for flyers who want to arrive at their holiday destination on time.

It is expected that there will be fewer flights departing this summer from hubs like Gatwick Airport as airlines cut back. It remains to be seen if this will have a positive effect on flight delays.

Easyjet confirmed recently that it already cut thousands of its own flights scheduled for this summer. Gatwick, one of the main UK departure airports that Easyjet flies from, also recently announced that it has slashed the total number of summer flights it would allow to fly from its hub.

British Airways cancelled 650 flights from two London airports, Heathrow and Gatwick. In total, so far BA has effectively removed 2.8 million seats from the market over June to October, which is around 10% of every planned departure. It was reported that rolling cancellations would continue.

The airlines were thought to be taking advantage of an airport slot amnesty that would end on July 8. Brought in to make airlines publish more “realistic” schedules, it means the airlines could cancel their allotted departures without penalty.

The Most On-Time UK Airlines 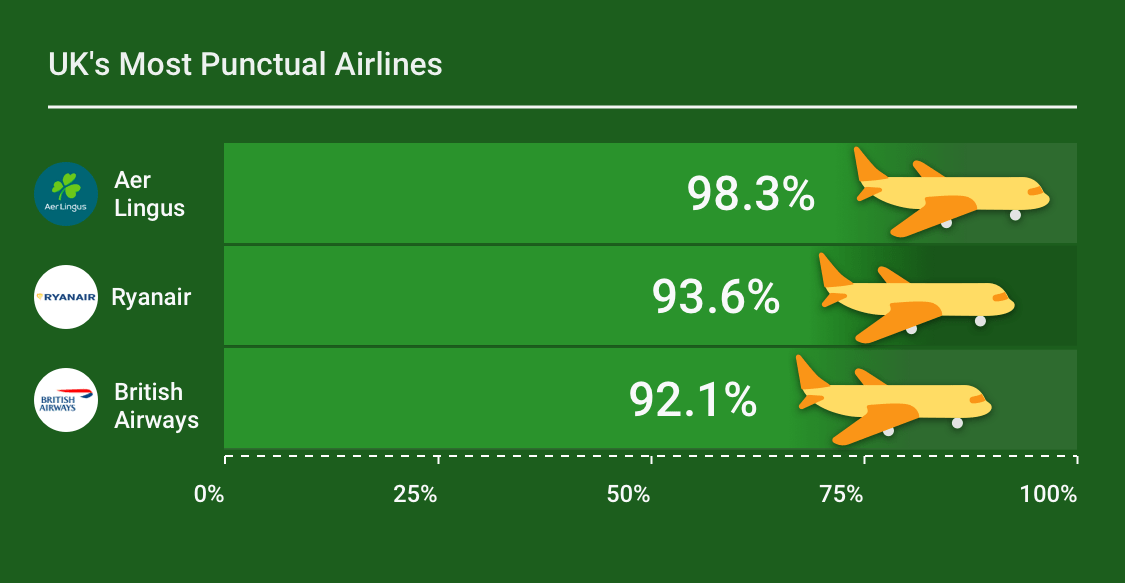 What happens if my flight is cancelled in the UK?

UK flight cancellations and delays are covered by rules for compensation that range from free food and drink all the way to a full refund. Airlines don’t make it easy to find the information, so here’s a simple breakdown.

When a Flight Is Cancelled

Under the law, a passenger can choose from a number of options.

The first option is to choose to get another flight to their destination. The airline must give the option of the earliest alternative flight. Moreover, you are entitled legally to assistance with expenditures if the alternative flight offered will cause you to be delayed by at least two hours.

Also, passengers who have already started their trip and don't want a replacement flight to get them to their destination also have a right to a flight back to the airport from which they initially departed.

Say for example there is a passenger flying from Manchester Airport to Tenerife with a transfer in Paris. If the airline cancels the flight from Paris to Tenerife, the passenger is entitled to a flight back to their departure airport, Manchester, for free.

The second option is to get a total refund, including the cost of any flights offered by the airline but not used as part of the original reservation.

The right to compensation applies when the airline cancels the flight with less than two weeks' notice or the replacement flight makes a passenger more than 2 hours late compared to their expected arrival time.

When can an airline refuse to give compensation?

The airline will not pay for the cancellation of a hotel booking or any other travel reservations if the flight is cancelled for reasons beyond its control.

When a Flight Is Delayed

When a flight is delayed the airline has to provide passengers with food and drink, and accommodation like a hotel if the delay is overnight. If the passengers are at the airport they could be offered a voucher for these items, and if they are not, they should ask an airline representative.

Even if an airline does not offer this on the spot, passengers should keep receipts for any costs incurred. Airlines must pay for any reasonable expenses incurred.

What flights are eligible to claim compensation?

European holidays are covered by the EC 261 air passenger protection regulation. In practice, EC 261 protects you if your flight originated in an EU airport or if you were travelling to Europe on an EU airline. So, if you were flying to Spain from the UK for example, the regulation would protect you and your rights.

How to Claim Compensation From an Airline

Having the flight booking reference number and other details are a must when contacting the airline’s customer service. Airlines that refuse to give passengers compensation can be reported to the Civil Aviation Authority.

Before escalating the complaint, a passenger should check if the airline is a member of an alternative dispute resolution (ADR) body and complain to them first.

What do you do if none of the above applies to you? In that case, a passenger will need to contact the airline directly. Rules applying to, for example, American airlines, would differ from the ones covering UK and European flights.

Many consumers also do not know about the Section 75 loophole. If a passenger paid with a credit card, under this section of the Consumer Credit Act, the card company is equally responsible for the goods and services bought. The only requirement is that the purchase is over £100.

Cancelled Flights and Who’s Responsible: Why Are UK Flights Being Cancelled So Much?

So many flights suffered from the recent half-term travel chaos that the UK government tried to intervene to prevent the same from happening for the summer season. Airports like Heathrow have complained of staff shortages that make smooth operations near impossible.

One group of workers that is confirmed to strike is the airport’s fuel workers. The Unite Union, which represents the Heathrow workers, has confirmed that at least 50 staff will walk out. The strike is planned for three days starting Thursday 21 July.

This coincides exactly with the start of British schools' summer holidays and is sure to cause parents and families further disruption over that weekend and beyond. Experts at aviation industry organization  Simple Flying predicted that 70 airlines would be affected across the board.

Strikes are being threatened by British Airways staff, and at 16,000 strong, this could have a massive knock-on effect on an already struggling industry. A total of 700 check-in and ground handling workers at Heathrow have already planned a walkout.

Unions and pay demands also had an effect on the resignation of Easyjet's chief operating officer, Peter Bellew, on 4 July. Prior to his departure, it was reported that he disagreed with the handling of union pay disputes.

What’s more, air travel is an interconnected industry so it’s not just the UK that has to be looked at when considering air chaos. European air travel staff are also planning strikes in the near future.

In France, three airports are threatened by Ryanair staff strikes, adding to woes from industrial action by Easyjet’s French pilots and French airport staff already planned for July. Scandinavian airline SAS are currently in talks with pilots over wage increases to prevent strikes.

As the cost of living increases, more workers in the airline industry have become fed up, especially after dealing with layoffs during the COVID-19 pandemic. This discontent is sure to continue throughout 2022.

What is being done to fix things?

The UK government announced a plan on 30 June to tackle disruption across the summer holidays. The intention is to protect flyers from airline chaos but also to make the airlines provide realistic expectations for flights.

As a part of its 22-point plan the government has set forth:

Fana is a writer and content specialist who specialises in the dynamic world of international publishing. For the past few years her area of particular interest has been in the evolution of gaming laws due to her legal background. You can catch her sailing or swimming at the nearest beach when she's not keeping up with the most recent iGaming news or honing her poker abilities 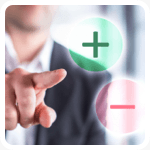 Spin to get bonus You're in luck! Unlock your bonus